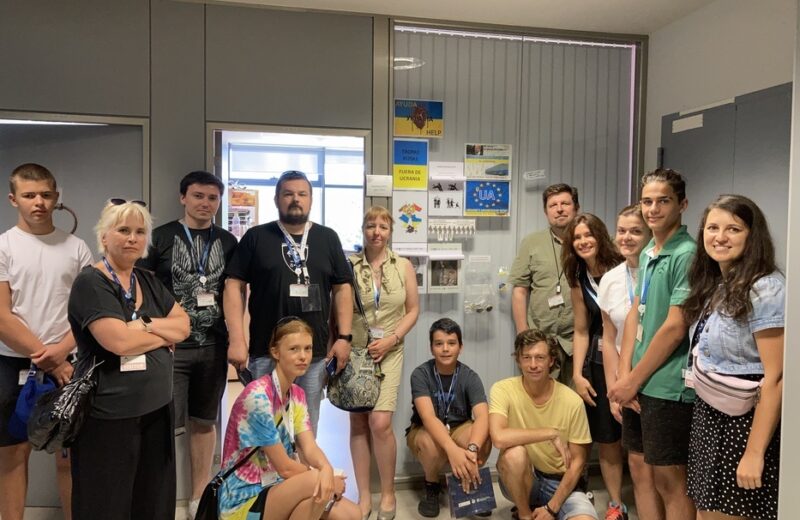 International team of scientists from Сatalonia

How an international team of scientists from Сatalonia are supporting Ukraine

During the visit, Lyubava Malysheva interviewed the hosts on behalf of Kyiv Post

Šics is a scientist working in the Experiments Division at ALBA. He is involved in the development of diagnostic instrumentation for the new synchrotron beamlines as well as metrology of optical systems for Х-ray applications.

Nosych, is an accelerator-diagnostics engineer from Kharkiv, Ukraine, whose lengthy experience includes working on the Large Hadron Collider in Geneva, Switzerland.

Šics: “Font de llum de sincrotró ALBA” (in Catalan language) is a third-generation accelerator that produces Х-rays. The facility employs about 260 scientists, with one group dedicated to the electron accelerator which produces Х-ray beams, and another group which uses these Х-ray beams to carry out scientific experiments.

Nosych: Apart from “applied” aspects of research, there is also a part dedicated to expanding understanding and knowledge relating to the world and materials around us. This is often referred to as “fundamental science” and is really the base without which “applied” science could not exist.

Malysheva: Who finances the project and who uses it?

Šics: The project was financed 50/50 by the regional government of Catalonia and central government of Spain. It’s used by scientists from all over the world, with the current exception of those affiliated with research institutions in Russia.

Malysheva: Who comes to ALBA to do experiments?

Šics: Approximately 85% of the available experimental time (beamtime, as it is called at this type of facility) is dedicated to scientists from institutions like CSIC (Ispanskij analog Akademiji Nauk), research groups in universities and experimentalists from industry. A small amount of the available beamtime is kept in reserve for unplanned and unforeseen circumstances and the rest of it is used by scientists working at ALBA.

Malysheva: Why is the research necessary?

Šics: This is about investment in the future and the results of our research are used in physics, chemistry, geology, biology, pharmacology, microbiology and nanotechnology. Granted, it sometimes takes quite a long time to start seeing the payback and society might even question whether the investment is justified when other more basic and everyday life needs are not properly addressed and resolved.

This is where political will and wisdom of those invested with power (political establishment and government etc.) should play a role. All developed countries invest heavily in education and science and that it always pays back.

Malysheva: Your door is plastered with posters in support of Ukraine, you hand out badges, participate in protests and collect aid. Why is this so important to you?

Šics: We have all been taught from childhood to distinguish between good and evil, to be honest and respect others. It gets into your subconscious. Somehow, mixed together with my knowledge of history (or versions of it that I have learned and studied) it all makes me the person I am today.

I see what the Russian government has been doing and continues to do. I have learned the history of my country of Latvia, some history about Russia and that of the Soviet Union where I spent my formative years. Like many, I thought that Russia as a country had changed following the collapse of the Soviet Union and the implosion of the regime of communism. Sadly, it hasn’t.

Today I see the Russian imperialist forces trying to build a new version of the empire. Not soviet and not communist – just Russian. I see them proclaiming the doctrine of some kind of Slavic fascism as their ideology for reconstructing the empire. They took years meticulously grooming and brainwashing their population while familiar actors – the KGB and FSB To me it all reeks of nazi Germany between the first and second world wars. History repeated in a slow-motion movie.

I see (and feel) a huge injustice and atrocity committed against the Ukrainian people and state by Russia. The same happened to the Baltic states and other countries that the Soviet Union annexed. And the same main actors have been at work: the KGB and then the FSB.

The playbook is essentially to declare the neighboring state as the enemy of civilization; bribe some locals to ask for Russian intervention to give some appearance of legitimacy to the whole enterprise; and then invade. Then there are claims of historic birth rights, wrongs and injustices that have to be undone by exterminating the neighbor and taking all they have.

I have read the piece that was published in the RIA website “What to do with Ukrainians” by Timofei Sergeitsev (3 April 2022) and which became known in Western media as a “Russian fascist manifesto.” It made me sick. I do not know why, but I just cannot look the other way and say it’s none of my business.

I feel for Ukrainians. The country may have huge political problems, a fragmented society and untamed omnipresent corruption – still a problem to a certain extent in Latvia – but they made a democratic choice. They fought for it in 2014 and shed their blood on Maidan square. Now, the Russian fascist government is trying to take it all away. My conscience just won’t let me live without protesting against this repeating history of atrocities committed in the name Russian glory and covered up in layers of lies upon lies.

Malysheva: How did ALBA scientists react to the war? What about Russian scientists?

Šics: Here at ALBA, scientific staff (and technical as well but to a lesser extent) are made up of people from many countries and nationalities. From the beginning of the war, there was a sympathetic reaction towards Ukraine’s tragedy, when the country was deceitfully invaded by Russian troops.

We joined a support campaign organized in the town of St.Cugat del Vallès, participated in demonstrations and collected humanitarian aid. People at ALBA then began actively discussing the development of the situation in Ukraine with colleagues across central and eastern Europe.

We set up an ALBA internal email channel for sharing news and announcements related to the war in Ukraine. However, after a while, many people got tired and used to this war. Only a few of us (as far as I know) – a Ukrainian, a Romanian, a Russian and myself – a Latvian – continued participating in protest demonstrations organized by Ukrainian organizations in Barcelona.

All of my Russian origin colleagues took a clear stance against this war and condemned the actions of Vladimir Putin and his henchmen. I am (as well as probably other colleagues who can read Russian and/or Ukrainian) actively following the situation in Ukraine not only from television news but from many sources available on the internet and via Telegram channels. I’m not talking about dry statistics but tales of real human suffering.

I started actively using this channel to publish material that seemed worthy to me. What I probably wanted was to not allow this war to become some “everyday background news”, nor to become the “new normal”, like the annexation of Crimea and years of war in the east of Ukraine.

Sometimes people commented back to me and that really was satisfying. But even if I do not hear back, I just have this urge to convey my perspective on this conflict. And it seems it has not been in vain.

At one point, shortly before Easter, a campaign was started at ALBA to collect donations for the Ukrainian cause. Some 50 colleagues participated and we raised 1,800 euros in approximately two weeks. A third of this amount was transferred to a volunteer organization in Barcelona that helps with food and necessary items for Ukrainian refugees in Barcelona and the surrounding area. Two thirds of the collected money was transferred to a Ukrainian organization in Estonia, which assists the Armed Forces of Ukraine by procuring medical supplies, as well as personal protective equipment (helmets, bulletproof vests, personal communication equipment etc.)

The refugee influx into Spain was on the increase and despite official institutionalized assistance, it was obvious that many needs were not being fulfilled. Then, a little more than three weeks ago, one of our Catalan colleagues at the laboratory came forward with an initiative to start collecting food, medicine, hygiene articles and other humanitarian donations for this volunteer center in Barcelona.

With the blessing of our director, we placed a few large boxes with banners in an area where people regularly pass by when going for lunch in the ALBA cafeteria. We started a communications campaign using the same ALBA email channel that was created for the purpose of sharing news about Ukraine, and colleagues responded by filling up these boxes with donations. Participation was slow in the first week, but it increased with time.

Malysheva: Does ALBA continue to collaborate on Russian scientific projects or has it joined the boycott of everything Russian?

Šics: Very soon after the Russian invasion of Ukraine, there was a communique issued by the ALBA administration about abandoning all collaborations with scientific institutions in Russia and Belarus.

A similar stance was adopted by scientific institutions in Germany. The German Federal Ministry of Education and Research issued directives to all German research institutes to suspend cooperation with Russian and Belarusian institutes forthwith.

Malysheva: You started a petition to rename an avenue in Barcelona. Why is it necessary to rename the avenue near the Russian consulate?

Šics: It’s important to remind the bully that his deeds are not and will not be accepted by the “neighborhood”. Every time a letter is sent to or from the Consulate General of the Russian Federation in Barcelona, and every occasion when they must write their address, I want them to face the shame of the crimes they have committed in Ukraine.

These kinds of acts are not new nor original. Streets where embassies and consulates of Russia are located have already been renamed in this way in many cities of Europe and across the world.

Malysheva: How do you rate the assistance provided to refugees in Spain?

Nosych: Spain was not politically and economically ready for refugees in the same way as, for example, Germany or France. This is a sleepy, Mediterranean, warm and poor country that lives off tourists and agriculture.

Nevertheless, Spain did the impossible — the country accepted tens of thousands of people, providing them with housing, food, medical care and the right to work. Therefore, despite all the shortcomings, support for Ukraine is unprecedented and invaluable, both at a political level and on a personal level between people.

Šics: One thing that I feel is missing, is government taking a strong stance against those people in Spain, including Spanish nationals and foreign residents who profess pro-Russian imperialist ideology and attempt to justify the Russian aggression against Ukraine.

Malysheva: What should the West do to stop Russian expansion?

Nosych: The West needs to open its eyes, intervene in the war and end it on its own terms.

Šics: Yes, I agree with this statement. However, it seems incredible that so many countries have claimed to support Ukraine in this war against Russian aggression, but so little advanced military help is being provided in reality.

Sometimes it makes me wonder what political game is being played. It seems that everyone is interested in curbing Russia as it gradually slides into a full-blown fascism ideology and becomes more and more dangerous to Europe and the rest of the world.

While the rate of military assistance is still at a level that just barely props up Ukrainians against a numerically superior enemy, it seems that not enough people care about the people of Ukraine being slowly slaughtered and bled out.