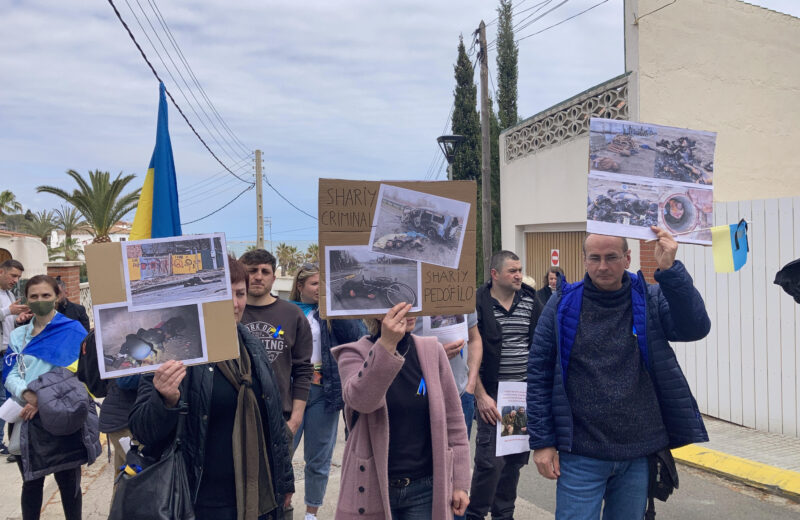 A protest by Ukrainians based in Spain took place on the afternoon of April 10. Once again it was held in front of one of the houses (Calle Pescados №7, Bloque A, №1, 43883 Roda de Bera, Tarragona) of Russian propagandist Anatoly Shariy who now lives in Tarragona, but who used to live in Ukraine.

At the last demonstration, which took place on March 24, the Shariys, husband and wife, came out and attacked people and yelled homophobic and violent insults at them. One of the accomplices attacked the car of one of the Ukrainians. Shariy himself recorded a video clip threatening the lives of activists. (https://www.bergenrabbit.net/2022/03/kolobok/)

The protest on April 10 brought together around 70 people from various cities and lasted for an hour. The house was blocked from Calle Pescados by local police, while two private guards from the Double Group (Carrer de Badosa, 08016) remained in the house, appearing on the balcony from time to time. Three more were stood among the protesters, but were spotted and forced to leave the area.

The Ukrainians in attendance were people of various age groups, including young children and the elderly. Some of them are refugees, some have been living in Catalonia for over 20 years, but every single one of them is a war victim. Some lost relatives in Ukraine, while others had to flee their homes.

The protesters read out a manifesto against the Shariys in Spanish. They explained to their neighbors that Shariy is responsible for the deaths of people as well as for cooperating with the Russian government and living off the money he had earned from this. They also read out other crimes committed by him; treason, attempted murder, attacks, paedophilia.

Protesters carried Ukrainian flags and the photos of ruined cities and murdered people. They also held placards with inscriptions, namely Shariy is a danger to society, Shariy is Russian propagandist = responsible for  genocide in Bucha, Shariy go fuck yourself along with that Russian warship, Black money – Tolya, bitch, get out, jail awaits you – confiscate the money, Traitor Shariy, you’ll die in Ukrainian prison with Olga, and not in a Spanish manor, Information war), and a print out of the Who is Putin’s accomplice in Barcelona. 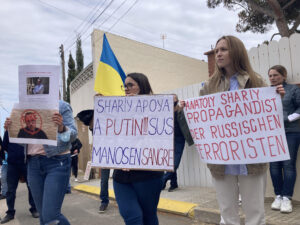 They sang the Ukrainian national anthem and shouted Shariy’s a Russian propagandist and a terrorist, You love Russia – go back to Russia, No to Russian propaganda, Shariy, get out you treacherous coward, Your neighbor’s murderer, Shariy get out of Europe, Killer and paedophile, Your hands are bloody, Shariy is a killer of Ukrainians, Russian money kills.

Mykhaylo Kostur, a well-known Barcelona maidan activist, called Shariy out: ‘Get out, you Internet coward. Are you afraid to talk to us? Look us in the eye if you dare! What will you do when we cut off all your funds? Who will protect you?’ Shriy ran out of the house, but was pushed back in by police. Kostur and 11 other activists walked around the block and came out onto the beach across the Shariys house and shouted from there, but Shariy didn’t appear again. 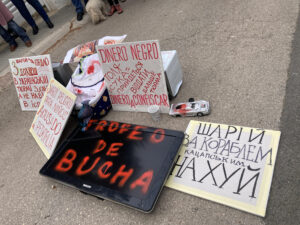 Protesters also left “Bucha trophies” painted in blood red in the middle of the street as a symbol of looting by Russian forces. (Photo Credit: Lyubava Malysheva)

In light of discovery of mass graves of Ukrainian in Kyiv’s suburbs recently, the Ukrainian protesters also left “Bucha trophies” painted in blood red in the middle of the street as a symbol of looting by Russian forces.

The “gifts” left included a microwave with the words Shariy is a Russian propagandist = responsible for Bucha genocide. The “bloodied” cribs included photos of Shariy and his wife Olga with the word “Fake” written across their faces. A PC monitor, plasma TV, a cup, and a toy car were placed nearby. There was also a pair of women’s underwear, with the comment that Russian looters take even used underwear, so Shariy’s wife may also need them. Activists asked police officers present whether they would pass the items along, and after being refused, placed them at the drive in. Later on, they presented the “gifts” to Shariy’s guards. 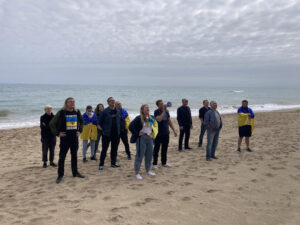 Translated from Russian by Mikhail Markov